ATRI unveiled its list of the top ten critical issues facing the North American trucking industry at ATA's Management Conference and Exhibition in October. For the third year in a row, the industry ranked the Hours-of-Service (HOS) rules as its top industry concern.  For the past two years, major HOS impacts on supply chains were the impetus behind the first place ranking.  In this year's survey, carriers and drivers voiced their concern over the uncertain future of the current suspension of the rules.

The complete results of the annual survey of over 4,000 industry stakeholders were released in October at the 2015 Management Conference and Exhibition of the American Trucking Associations (ATA) meeting in Philadelphia, PA, the nation's largest gathering of motor carrier executives.  The ATRI Top Industry Issues report also solicited and tabulated specific strategies for addressing each issue. 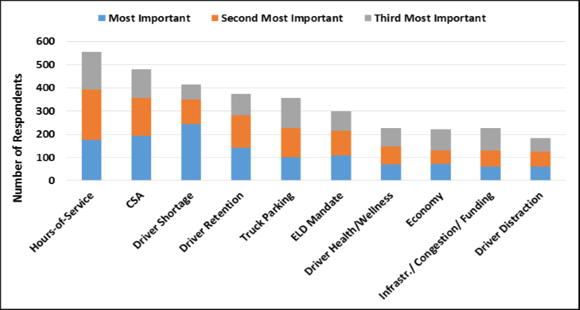 Moving up a position from last year, FMCSA's continued challenges with its Compliance, Safety, Accountability (CSA) program resulted in a second place ranking.  CSA was closely followed in the ranking by the growing shortage of truck drivers.  Related to the driver shortage, driver retention retained its fourth place ranking this year as trucking fleets work to retain their most experienced and qualified drivers.

The lack of available safe truck parking rounded out the 2015 list as the number five issue.  Since first appearing as an issue in the annual survey, truck parking has been on the rise as an industry concern.  It initially ranked 8th in the 2012 survey and has steadily climbed to the top five issues.  Truck parking was also identified by ATRI's Research Advisory Committee as the top research priority for 2015.

The survey also identified emerging issues in the trucking industry that generated a measurable amount of concern, but not enough to make the top ten list of most critical issues.  Two issues which were added for the first time to the survey made the list of emerging issues, the first of which is the overall mission of the Federal Motor Carrier Safety Administration.  Federal tax reform was the second emerging issue new to the survey this year.

"There is perhaps no better benchmark for the challenges we face as motor carriers and drivers than ATRI's annual survey of top industry issues. As issues climb in ranking each year, so does our collective need to aggressively identify solutions to address those issues," said ATA Immediate Past Chairman Duane Long, chairman, Longistics, Raleigh, NC.

"As we all know, the trucking industry operates in a complex and evolving environment and we must constantly work to understand how regulatory actions and operational challenges impact the industry," ATA President and CEO Bill Graves said. "By improving our understanding of the issues, we can be better stewards of the important job our industry is tasked with."

With the recent passage of the FAST Act, the five-year $305 billion transportation funding bill, several of the top-ranked strategies identified by ATRI survey respondents have been addressed.  Among these is the removal of CSA scores from public view until research is done to identify if scores accurately predict crash risk and identification of a process that removes non-preventable crashes from a carrier's scores.

A copy of the survey results is available from ATRI's website at www.atri-online.org.

The above article was used with permission from The American Transportation Research Institute.